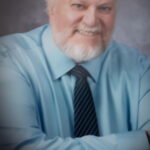 He taught music from Grades One thru Nine in St.Paul, Alberta and from 1974-1992 worked at Medicine Hat College in the Conservatory of Music and Dance, ending as Head of the Department. From 1992 to 2005 he owned Scot’s Music Centre Ltd. In Calgary along with his wife Elizabeth.

He has played violin in a number of orchestras (currently the Calgary Civic Symphony), conducted the Medicine Hat Symphony and was the music director for a number of musicals while in Medicine Hat. He has sung in Sing Out Edmonton, Les Musicos (St. Paul Ab), MRC Kantorei (Calgary), WestWinds Choral Ensemble (Calgary) as well as church choirs in Edmonton, St. Paul, Medicine Hat, Lubbock, Tx and Calgary.

Carle has spent his life teaching violin and other string instruments. His students have had great success – a number of them pursuing professional careers in music, and also attaining high grades in both Conservatory Canada and Royal Conservatory of Music exams (including highest marks in Canada). Carle also enjoys conducting – and especially has enjoyed directing church ensembles – in St. Paul, Lubbock, and Calgary. He also has a passion for trains and travelling.